Deforming osteoarthritis of the clavicular-acromial joint

The acromioclavicular joint connects the acromion of the scapula and the acromial end of the clavicle, which touch each other with ellipsoid surfaces, which are often separated by the articular disk.

This joint is characterized by a relatively small range of motion, unlike the hip or, for example, the elbow. Despite this, with excessive loads, there is a gradual thinning and destruction of the cartilage tissue. Arthrosis begins, which initially manifests itself as a small aching pain in the damaged shoulder, and in the subsequent stages of the disease leads to almost complete loss of mobility. 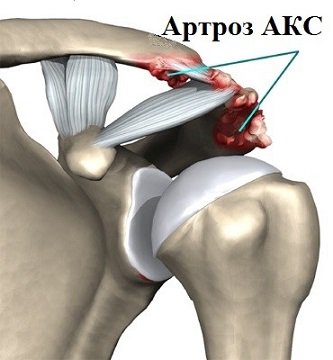 Arthrosis of the acromioclavicular joint often occurs against the background of heavy physical exertion (in weightlifters, people of physical labor), but it is possible to develop it after an injury or in patients of older age categories.

Diagnosis of AKS arthrosis is not difficult – in a clinical study, pressing the AKS area causes discomfort and pain. Ultrasound diagnostics also reveal signs of osteoarthritis – marginal bone growths, synoviitis. Radiologically determine the narrowing of the articular fissure, exostosis (marginal bone growths). The most informative, but not the main, when making a diagnosis of osteoarthritis of ACS is considered to be a magnetic resonance study, which allows you to see and evaluate the possibilities of conservative treatment, and also helps in planning surgical treatment for a comprehensive assessment of the condition of the shoulder joint. Pronounced marginal bone growths in osteoarthritis of the AX can injure the tendons of the rotator cuff of the shoulder, especially with additional physical exertion (lifting heavy objects) or injury more often as a result of a fall.

Conservative treatment includes medication to reduce pain with non-steroidal anti-inflammatory drugs, the appointment of chondroprotectors, as well as intra-articular administration of long-acting glucocorticoids with severe pain to relieve the latter.

In the early stages of osteoarthritis of ACS, injections of platelet-rich plasma under ultrasound control are widely used, which bring a reduction in pain and discomfort. Depending on the severity of the pain syndrome, first a blockade with long-acting glucocorticoids is used, and then after 3-4 weeks, injections of platelet-rich plasma (usually from 1 to 3 injections with an interval of 3 weeks). 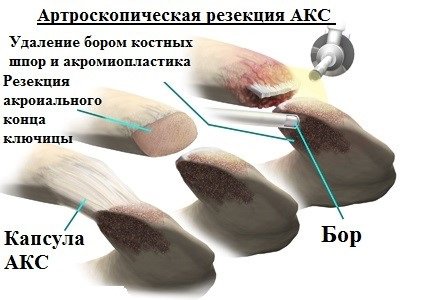 In the postoperative period, the patient is recommended to wear a kerchief bandage for comfort during the actual intervention only on the AKS (resection of the acromial end of the clavicle and debridement), but more often when performing the suture of the damaged tendons of the rotator cuff of the shoulder and at the final stage-resection of the AKS affected by arthrosis, a special bandage with a diverting pillow is used for 4-6 weeks in order to immobilize the reconstructed tendon injuries.