Main pageWhat do we treatAnkle jointFoot DiseasesNeuroma Morton
Back to services
Morton's neuroma is a benign thickening, which is an overgrowth of fibrous tissue on the foot in the area of the plantar nerve of the foot. This condition is referred to as Morton's metatarsalgia, Morton's syndrome, Morton's disease, interdigital neuroma, foot neuroma, perineural fibrosis, and Morton's toe syndrome. 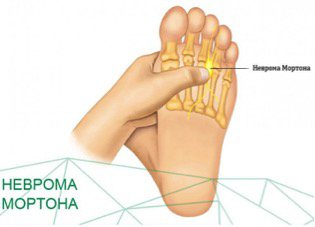 The mechanism of development of Morton's neuroma has not been sufficiently studied, but a number of hypotheses have been proposed. When studying the morphological material, it was concluded that in this pathology, a thickening occurs on the interplatarsal branch of the tibial nerve, while the researcher believed that this is not a true neuroma, but a pseudoneuroma similar to the one that develops in the trunk of the median nerve above the place of its compression in carpal tunnel syndrome. Later, changes were described that ranged from thickening of the wall to complete obliteration of the lumen of the artery that feeds the nerve and adjacent tissues in this area of the foot, and a conclusion was made about the ischemic nature of the pathological process.

Currently, it is believed that the trigger moment is repeated, multiple microtraumas and compression of the nerve that passes between the 3rd and 4th metatarsal bones, resulting in thickening of the transverse interplatarsal ligament of the foot, its division into fibers and the formation of edema.

The so-called pathological interplatarsal ligament of the foot leads to constant compression and displacement of the medial plantar nerve and its accompanying vessels, causing its ischemia. Modern studies have shown that the average size of the neuroma in length is 0.95-1.45 cm, and in width-0.15–0.65 cm, i.e. this formation is elongated, fusiform.

Asymptomatic course of Morton's metatarsalgia is possible if the size of the neuroma is less than 5 mm . The progression of the disease leads to the appearance of first shooting, aching pains in the area of the 3rd-4th toes, which occur after physical exertion, in combination with sensitivity disorders. At night, uncomfortable sensations in the foot practically do not appear. If the patient does not seek medical help in time, the symptoms of the disease increase.

Over time, the frequency and intensity of pain increases, and the time interval from the beginning of the load to the onset of symptoms decreases. As a result, the pain becomes acute, burning in nature, begins to appear at rest, often a feeling of the presence of a foreign object in the shoe is formed,but there are no external changes in the foot. With palpation, the pain increases dramatically. In parallel with the progression of the pain syndrome, there may be an increase in sensory disorders, up to anesthesia.

The clinical diagnosis of this pathological condition is simple. First of all, it is based on the characteristic localization of the pain syndrome. With palpatory compression of the 3rd interplatural space for 30-60 s. The patient, as a rule, begins to experience numbness and a burning sensation. Motor disorders are uncharacteristic. Sensory disturbances confirm a neural lesion.

Speaking about instrumental studies of Morton's metatarsalgia, it should be noted that magnetic resonance imaging, unfortunately, does not always confirm the clinical diagnosis and in some cases gives questionable results. Performing a CT scan of the foot rarely provides any information due to the absence of mineral deposits in this soft tissue formation. However, thanks to the methods of radiography, it is sometimes possible to determine the usuration of the bone at the site of compression by the neuroma.

Ultrasound examination is one of the leading methods for diagnosing the condition of soft tissue structures of the foot. However, in our country, the use of ultrasound for the diagnosis of peripheral nerve diseases is not sufficiently developed.

Regression of the pain syndrome after therapeutic and diagnostic blockade of the interplatarsal nerve with a solution of local anesthetic is a convincing sign in favor of the neuroma.

Pain in the foot and fingers is often observed in clinical practice, in most cases it is caused by deformity of the foot, which is noted in various pathological conditions, in particular with flat feet or chronic tendinitis of the Achilles tendon. At the same time, with significant deformity of the feet, a pronounced pain syndrome does not always develop, as, for example, in patients with hereditary spastic paraplegia.

Differential diagnosis of Morton's neuroma is performed with the following diseases:


< li>synovitis of the metatarsophalangeal joint,< / li>

At the initial stages of the development of the disease, conservative treatment is carried out. The first recommendations of the attending physician are:

The essence of these methods is to reduce the pressure on the nerve trunk. The use of custom-made orthopedic insoles increases the effectiveness of conservative treatment. With their help, it is possible, firstly, to reduce the load on the anterior area of the foot and normalize the condition of the transverse arch; secondly, to reduce the pressure of bones and ligaments on the damaged nerve, which allows you to stop the development of the disease; thirdly, to eliminate the inflammatory process in the nerve fibers and tissues, which significantly reduces or completely eliminates pain; fourth, to restore the structure of the foot, thereby ensuring the correct gait.

The lack of effect are injections of corticosteroids in Besplatniy the gap on the back side of the foot under ultrasound control in half of the cases leads to an improvement of the disease, and in a third of cases — to a full recovery. If the patient has deforming arthrosis, it is possible to prescribe preventive therapy with chondroprotectors.

In the case of resistance to conservative methods of treatment, patients are offered surgical treatment. At the same time, there are several different approaches to the treatment of Morton's syndrome surgically

The most common operation performed under local anesthesia is the removal of the neuroma. Since it is part of the nerve, the hypertrophied and inflamed part of it is excised. In most cases, this eliminates the pain syndrome, but, as a rule, a small area of unexpressed numbness remains on the foot, which is almost always not felt until the patient touches it. The motor and support functions of the foot do not suffer. The rehabilitation process averages 2-4 weeks, during which the patient is recommended to reduce the load on the foot.

Some surgeons believe that excision of the inflamed nerve area as a primary surgical method is too radical. Surgery to dissect (release) the transverse ligament between the metatarsal bones will eliminate the compression of the nerve. One of the advantages of this method is the absence of sensory disorders. In the event that this operation does not lead to success, it is possible to excise the neuroma.

Osteotomy of the 4th metatarsal bone is the least used method of surgical treatment of the pathology in question. The essence of the intervention is to achieve nerve decompression by shifting the head of the 4th metatarsal bone after osteotomy (artificial fracture). Such manipulation is performed under X-ray control through an incision or puncture of the skin, not exceeding 2 mm.

Analysis of the effectiveness of surgical treatment of Morton's neuroma showed excellent results (complete absence of pain syndrome and other symptoms) in 45% of cases, good results (significant reduction of pain syndrome and almost complete regression of neurological symptoms) — in 32%, in 15% of cases the outcomes were satisfactory (pain syndrome decreased slightly, neurological symptoms persist), in 8% — unsatisfactory (the operation did not bring any improvement). The low efficiency of surgical interventions is associated with the formation of a true amputation neuroma in the area of the proximal part of the interplatarsal nerve.

ENTRUST THE CARE OF YOUR HEALTH TO REAL PROFESSIONALS! < / div>